The Government's scientific advisors recommended the implementation of a short term Circuit breaker lockdown on 21st September.
Taking action then would've meant short term restrictions but would have made the need for a harsher lockdown like we will see now avoidable.
Today's announcement by the Government was avoidable if they had listened to their own scientists. Instead they wanted to 'keep the country moving.' Now their failure to act means they are doing the exact opposite.
Serial incompetence.

The Mayor of London has today reached an eleventh-hour agreement with the Government on a funding deal to keep tube, bus and other TfL services in the capital running until March 2021.

Sadiq Khan said the deal was "not ideal” but added: "We fought hard against this Government which is so determined to punish our city for doing the right thing to tackle Covid-19. The only reason TfL needs government support is because its fares income has almost dried up since March.”

The Mayor has succeeded in killing off the very worst Government proposals, which were confirmed in writing by the Transport Secretary during the negotiations. The Mayor had rejected the extension of the £15 daily Congestion Charge to the North and South circular roads as ministers had wanted – in a proposal which would have hit four million more Londoners hard. The Government has now backed down from this condition.

The deal makes around £1.8 billion of Government grant and borrowing available on current projections to TfL in the second half of this financial year. Transport for London will itself make up through cost savings the £160million gap the deal leaves from the nearly £2 billion the organisation projects it will need to run the tube, bus & other TfL services for the remainder of this financial year.

As part of the deal, London will also have to raise extra money in future years. Decisions about how this additional funding will be raised are yet to be made by the Mayor, but some of the options that he and the government have agreed to be looked at include a modest increase in council tax, pending the appropriate consultation, as well as keeping in place the temporary changes to the central London Congestion Charge that were introduced in June 2020, subject to consultation.

Despite providing the private rail operating companies with 18 months of funding with no conditions attached, the Government has refused to give TfL more than a six-month deal and even this has come with conditions. This means another financial agreement will have to be negotiated just before next year’s mayoral election, a far from ideal time to negotiate a fair long-term deal for London.

“These negotiations with Government have been an appalling and totally unnecessary distraction at a time when every ounce of attention should have been focused on trying to slow the spread of Covid-19 and protecting jobs.

“The pandemic has had the same impact on the finances of the privatised rail companies as it has had on TfL and the Government immediately bailed them out for 18 months with no strings attached. There is simply no reason why the same easy solution could not have been applied to London, which would have allowed us all to focus on the issues that matter most to Londoners, which are tackling the virus and protecting jobs.

“I am pleased that we have succeeded in killing off the very worst Government proposals.

"These proposals from the Government would have hammered Londoners by massively expanding the congestion charge zone, scrapping free travel for older and younger Londoners and increasing TfL fares by more than RPI+1. I am determined that none of this will now happen.

"This is not a perfect deal, but we fought hard to get to the best possible place. The only reason TfL needs Government support is because almost all our fares income has dried up since March as Londoners have done the right thing.”

To say that recent negotiations between the Government and London have been tense over the finances of Transport for London would be putting it mildly. 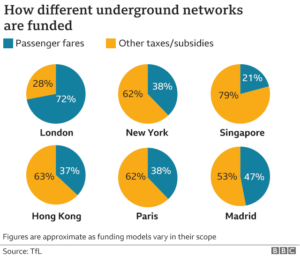 Transport for London’s main source of income is fares. It is the least subsidised major transport system in the world. 72% of it’s funding comes from Passenger fares. Before the Coronavirus period, TfL’s finances were in a good condition as verified by independent auditors. With failed projects such as the Garden Bridge which was never built and the phasing out of a Government Grant to TfL, Boris Johnson left TfL with a £1.5bn deficit when he left the Mayoral office in 2016. In addition, a legacy of his deal with the David Cameron Government means that from 2021, the £500m raised every year from Londoners paying Vehicle Excise Duty (more commonly known as the Road Tax) will be collected by central Government and not given back to London – thereby only invested in roads outside the Capital.

Under Sadiq Khan’s mayoralty, TfL’s operating deficit before the Covid 19 period hit was reduced by 71%.

The Coronavirus lockdown and the continued message to stay at home and work from home as much as possible has led to a drastic reduction in people using London’s public transport system. At the peak of the pandemic, TfL's passenger income was reduced by more than 90 per cent compared to last year. TfL kept running trains and buses throughout the pandemic period to ensure that essential workers such as NHS staff could get to work. This has had a devastating financial impact on the essential public service.

Transport for London is not alone. Transport networks in other cities such as Manchester, Tyne and Wear, Nottingham, the West Midlands and Sheffield for example have also been impacted. However these transport networks have all been given debt free bailouts.

London has been treated differently. In order to receive a bail out, the Government has set conditions on receiving bailout funding. Within the first round of bail out negotiations, those conditions included;

As part of fresh negotiations, the Government is proposing further conditions as part of a bailout deal. These include;

This approach from Government is very political and quite clear they are more interested in political elections rather than dealing with urgent and emergency issues. However in trying to hurt or attack the Mayor of London, they are in fact hurting people and businesses in London.

If you have tested positive for coronavirus or have been in close contact with someone who has tested positive, you may be entitled to a new Test and Trace Support Payment of £500. This is for residents on lower incomes who cannot work from home and have lost income as a result. Self-isolation is a legal duty for all those who test positive for COVID-19 or are identified by NHS Test and Trace as a close contact since 28 September 2020.

To be eligible for the Test and Trace Support Payment, an individual must:

APPLY FOR A TEST AND TRACE SUPPORT PAYMENT IN BRENT

APPLY FOR A TEST AND TRACE SUPPORT PAYMENT IN HARROW

The number of COVID-19 cases is increasing rapidly across London and we are now in danger of losing control of this deadly virus.

This means new local restrictions are necessary to get this under control to protect you, our NHS and the local economy. From Saturday 17 October all of London, including Brent and Harrow, were moved into the high level of alert.

The most significant new rule is that you must not meet socially with friends and family indoors, unless you live with them or have formed a support bubble together. This applies in your home, and at pubs or restaurants.

You can continue to see friends and family, who you don’t live with, in outdoor spaces, such as parks, but you must not meet in a group of more than six – including children.

Please work from home if you can and reduce the number of journeys you make. To help stop the spread of coronavirus it is vital that we all continue to:

Look out for the symptoms of coronavirus which are: a high temperature; a new, continuous cough or a loss or change to your sense of smell or taste. If you have these symptoms, stay at home and apply for a test.

This is a difficult and worrying time for many of us. I know how many sacrifices you have made, to protect your loved ones, friends and neighbours. But a big effort from us at this moment can save lives, protect the local economy and stop the big growth in cases seen in other parts of the country.

By following the rules together, we can all play our part in keeping ourselves, our families and communities safe. More information about what the new restrictions mean for businesses and your household, including childcare, is available at gov.uk